Eurasian Collared-Doves coming soon to a neighborhood near you 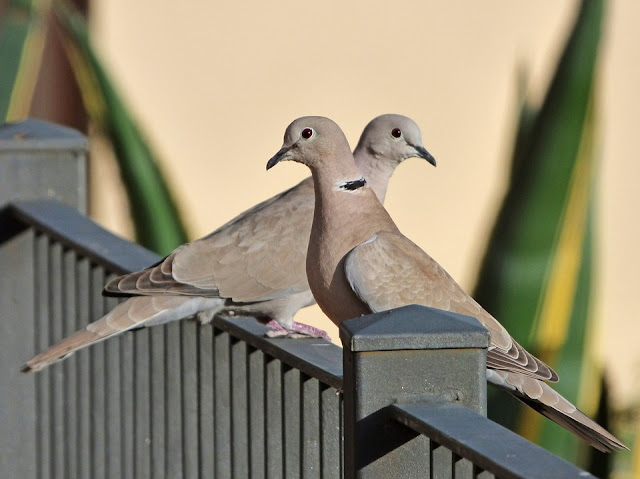 The Eurasian Collared-Doves (Streptopelia decaocto) original range at the end of the 19th century was warm temperate and subtropical Asia from Turkey east to southern China and south through India to Sri Lanka.

In 1974, less than 50 Eurasian Collared-Doves  escaped during a burglary from a pet shop in the Bahamas. Since then, they have been fruitful and multiplied across the North American continent. A pair can produce up to six broods a year in warmer climates. As you can see in the data collected by ebird, they will probably be a common bird sighted in Michigan in another 10 years.

The genus Streptopelia is from the Greek streptos, a collar of twisted chain mail, and peleia, a dove. And interestingly their species name decaocto is the name of a servant girl from a Greek folktale that was transformed into a dove by the gods to escape; the dove’s mournful cry recalls her former life. The song is a koo-KOO-kook.

They are a pale buff-gray dove with a black collar and noticeably larger than a Mourning Dove. They also have red eyes (adults have brighter red eyes than juveniles). Studies on interactions between collared-doves and other species have not yet shown a negative impact on populations of native birds, including Mourning Doves. Some thoughts are that they fill the niche of the Passenger Pigeon, once the most common bird in North America that went into a catastrophic decline in numbers and then extinct by 1914 due to over-hunting.