Tree Sparrow mixing in with the Juncos 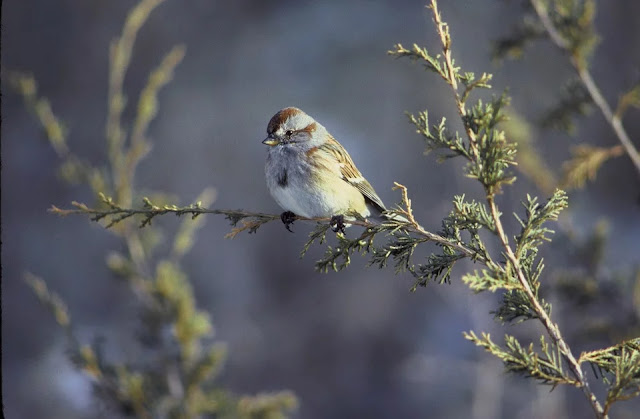 I was watching some Dark-eyed Juncos flitting under the feeder and noticed a tidy little sparrow mixing in with the flock. 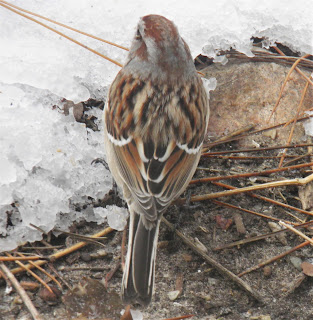 American Tree Sparrows are a familiar migrant and winter visitor in mid-Michigan. You might confuse them with a House Sparrow at first glance. They are small, grayish-brown birds with a rufous crown and eyeline, a dark spot on the breast, a long notched tail, a dark bill, gray head, chin, throat, breast and underparts and a rufous patch on the sides of their breast. Males and females are similar in appearance.

“American Tree Sparrow” is somewhat of a misnomer as the species breeds in remote northern areas of the continent, often north of the treeline. The name was given by early European settlers for the superficial resemblance of this species to the Eurasian Tree Sparrow (Passer montanus).

During the winter, American tree sparrows mainly eat grass and weed seeds. They roost alone in conifers, thick bushes, or they may shelter communally under the snow. American Tree Sparrows need to take in about 30 percent of their body weight in food and a similar percentage in water each day. A full day's fasting is usually a death sentence. Their body temperature drops and they lose nearly a fifth of their weight in that short time.