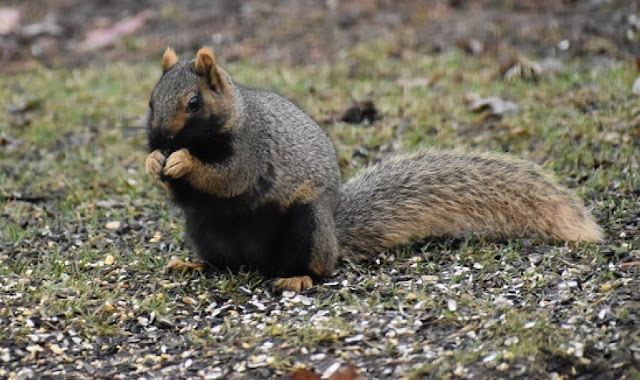 This picture came from my neighbor; she's seen these squirrels for several years now, and with the atypical black coloration underneath, she would be interested in knowing what they are. Any thoughts? 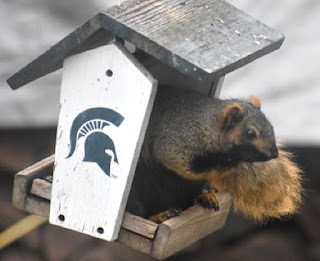 My first guess is a mixed colored Gray Squirrel. The Eastern Gray Squirrel (Sciurus carolinensis) is slender and smaller than the eastern Fox Squirrel (Sciurus niger). The genus name Sciurus is from the Greek meaning "shade tail." The species name, niger, is Latin for black because the original species description was based on an all black individual. So both squirrel species can exhibit black mutations. It is hard to tell from the photos. In areas with high concentrations of black squirrels, litters of mixed-colored babies are common. But these may be a throw back Fox Squirrels too.

It's interesting to me that they're so standardized in the color pattern.

On the both squirrels the tummy is usually a solid lighter color but that variant form of a specific gene sometimes produces the dark pigment. It is common to see the all black squirrels in my neighborhood with a different colored tips including nose/mouth, hands/feet, ears, and tail in a red or white. They are fun to anticipate!

I'm thinking (after researching a bit) that what we have had here is Fox Squirrels, with the reddish accents. Gretchen's just around the corner, but I have never seen "her" squirrels here. About 20 years ago black (Eastern Gray?) squirrels made a colonization attempt, but it failed. Gretchen said "Go ahead & use the pictures."

I think you are right and they are uncommonly colored Fox Squirrels.